Become a better programmer with exercism.io 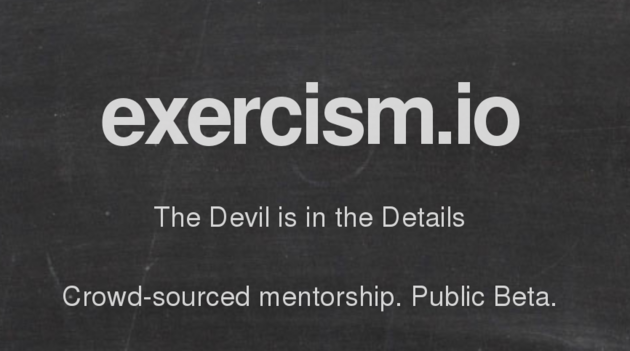 For the past week I’ve been trying out exercism.io the programming exercises app. I heard about it back in December when Gabor blogged about it, but didn’t try it until now. I wish I hadn’t waited so long, as exercism is a lot of fun.

When you are done and have submitted your Perl module via the command line app, you and other programmers can “nitpick” your code and comment on it. Once you feel you have gotten enough comments, you can finalize your submission and view other programmer’s solutions for the same exercise. The kicker is that you only receive one programming exercise at a time, and cannot access another exercise until you complete the current one.

Perl’s TIMTOWTDI nature means that there are several correct solutions for the exercises and you can often learn something from viewing other programmers’ solutions. For example in one exercise I used a regular expression only to find that the simpler transliteration operator worked just as well. The exercise difficulty varies from easy to hard, but the real challenge is finding a clean, generalized solution for the spec.

Grab the latest binary for your platform and extract it. Fire up the command line and type:

This will fetch the first exercise (“Bob” at the time of writing). You can find the test file and readme at “perl5/bob/”. Opening the readme you’ll see:

To run the test file change into the exercise directory and use prove:

That will get this output:

This is a shell of the solution. Our “hey” subroutine returns the first input it receives. Re-running prove, we get this output:

You can see that Bailout is no longer being called, so our basic module passed the first few tests, but failed 19 of 22. I’ve abbreviated the output to show only the first failing test. The output tells us everything we need to know: our “hey” subroutine did not return the content required by the spec. I’ll leave the exercise here - if you’re feeling suitably inspired see if you can complete it.

One of the exercism’s strengths is it has the same programming exercises in different programming languages, so you can develop your polyglot skills. Looking at the source, it appears that JavaScript, Python, Ruby and Haskell are leading the pack with about 55 exercises available each. Perl is well-represented with 36 exercises and the other languages have about 20 or fewer.

It only take about 30 minutes to port one exercise: if 2% of the readers of this article port one exercise each today, Perl will immediately have more exercises than any other language. There is also an empty Perl 6 repo; porting the Perl 5 exercises to Perl 6 could make for a juicy hackathon target.

Playing with exercism has been loads of fun and I’ve learned a few Perl tricks (hah!) along the way. The source is MIT licensed and the committers are friendly. It would be great to see more Perlers participating or porting an exercise or too. Feel free to clone or or stencil the quest. Let’s show people what our language can do!

Enjoyed this article? Help us out and tweet about it!