HTTP::Recorder is a browser-independent recorder that records interactions with web sites and produces scripts for automated playback. Recorder produces WWW::Mechanize scripts by default (see WWW::Mechanize by Andy Lester), but provides functionality to use your own custom logger.

Simply speaking, HTTP::Recorder removes a great deal of the tedium from writing scripts for web automation. If you’re like me, you’d rather spend your time writing code that’s interesting and challenging, rather than digging through HTML files, looking for the names of forms an fields, so that you can write your automation scripts. HTTP::Recorder records what you do as you do it, so that you can focus on the things you care about.

We all know that testing our code is good, and that writing automated tests that can be run again and again to check for regressions is even better. However, writing test scripts by hand can be tedious and prone to errors. You’re more likely to write tests if it’s easy to do so. The biggest obstacle to testing shouldn’t be the mechanics of getting the tests written — it should be figuring out what needs to be tested, and how best to test it.

Part of your test suite should be devoted to testing things the way the user uses them, and HTTP::Recorder makes it easy to produce automation to do that, which allows you to put your energy into the parts of your code that need your attention and your expertise.

When you think about web automation, the first thing you think of may be automated testing, but there are other uses for automation as well:

How to Set It Up

Use It with a Web Proxy

One way to use HTTP::Recorder (as recommended in the POD) is to set it as the user agent of a web proxy (see HTTP::Proxy by Phillipe “BooK” Bruhat). Start the proxy running like this:

Then, instruct your favorite web browser to use your new proxy for HTTP traffic.

Other Ways to Use It

How to Use It

Once you’ve set up HTTP::Recorder, just navigate to web pages, follow links, and fill in forms the way you normally do, with the web browser of your choice. HTTP::Recorder will record your actions and produce a WWW::Mechanize script that you can use to replay those actions.

The script is written to a logfile. By default, this file is /tmp/scriptfile, but you can specify another pathname when you set things up. See Configuration Options for information about configuring the logfile.

The control panel won’t automatically refresh , but if you create HTTP::Recorder with showwindow => 1, a JavaScript popup window will be opened and refreshed every time something is recorded. 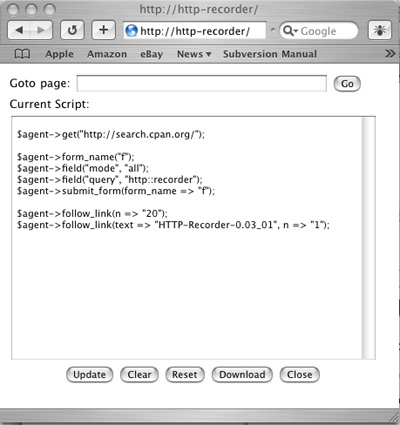 Goto Page. You can enter a URL in the control panel to begin a recording session. For SSL sessions, the initial URL must be entered into this field rather than into the browser.

Current Script. The current script is displayed in a textfield, which you can edit as you create it. Changes you make in the control panel won’t be saved until you click the Update button.

Update. Saves changes made the script via the control panel. If you prefer to edit your script as you create it, you can save your changes as you make them.

Clear. Deletes the current script and clears the text field.

Reset. Reverts the text field to the currently saved version of the script. Any changes you’ve made to the script won’t be applied if you haven’t clicked Update.

Download. Displays a plain text version of the script, suitable for saving.

You can record many things, and then turn the recordings into scripts later, or you can make changes and additions as you go by editing the script in the Control Panel.

For example, if you record filling in this form and clicking the Submit button:

However, if you’re writing automated tests, you probably don’t want to enter hard-coded values into the form. You may want to re-write these lines of code so that they’ll accept a variable for the value of the name field.

You can change the code to look like this:

Then click the Update button. HTTP::Recorder will save your changes, and you can continue recording as before.

You may also want to add tests as you go, making sure that the results of submitting the form were what you expected:

You can add tests to the script like this:

In order to do what it does, HTTP::Recorder relies on the ability to see and modify the contents of requests and their resulting responses…and the whole point of SSL is to make sure you can’t easily do that. HTTP::Recorder works around this, however, by handling the SSL connection to the server itself, and and communicating with your browser via plain HTTP.

*Caution: Keep in mind that communication between your browser and HTTP::Recorder isn’t encrypted, so take care when recording sensitive information, like passwords or credit card numbers. If you’re running the Recorder as a proxy on your local machine, you have less to worry about than if you’re running it as a proxy on a remote machine. The resulting script for playback will be encrypted as usual.*

If you want to record SSL sessions, here’s how you do it:

Start at the control panel, and enter the initial URL there rather than in your browser. Then interact with the web site as you normally would. HTTP::Recorder will record form submissions, following links, etc.

HTTP::Recorder getting pages, following links, filling in fields and submitting forms, etc., but it doesn’t (at this point) generate a complete perl script. Remember that you’ll need to add standard script headers and initialize the WWW::Mechanize agent, with something like this:

Output file. You can change the filename for the scripts that HTTP::Recorder generates with the $recorder->file([$value]) method. The default output file is ‘/tmp/scriptfile’.

Prefix. HTTP::Recorder adds parameters to link URLs and adds fields to forms. By default, its parameters begin with “rec-”, but you can change this prefix with the $recorder->prefix([$value]) method.

Logger. The HTTP::Recorder distribution includes a default logging module, which outputs WWW::Mechanize scripts. You can change the logger with the $recorder->logger([$value]) method, replacing it with a logger that:

RT (Request Tracker) 3.1 by Best Practical Solutions has a Query Builder that’s a good example of a page that benefits from a custom logger: 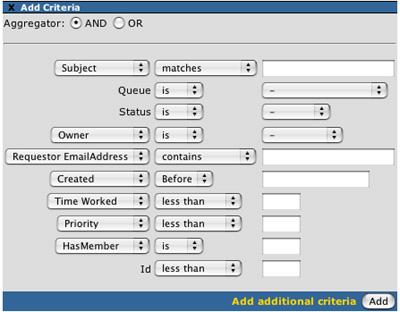 This page has several Field/Operator/Value groupings. Left to its own devices, the default HTTP::Recorder::Logger will record every field for which a value has been set:

But on this page, there’s no need to record setting the values of fields (XField) and operators (XOp) unless a value (ValueOfX) has actually been set. We can do this with a custom logger that checks for the presence of a value, and only records the value of the field and operator fields if the value field has been set:

Tell HTTP::Recorder to use the custom logger like this:

And it will record a much more reasonable number of things:

Control panel. By default, you can access the HTTP::Recorder control panel by using the Recorder to get http://http-recorder. You can change this URL with the $recorder->control([$value]) method.

However, if you prefer a different agent name (in order to drop recorded lines into existing scripts, conform to company conventions, etc.), you can change that with the $logger->agentname([value]) method:

will produce the following:

The biggest challenge to writing a web recorder is knowing what the user is doing, so that it can be recorded. A proxy can watch requests and responses go by, the only thing you’ll learn is the URL that was requested and its parameters. HTTP::Recorder solves this problem by rewriting HTTP responses as they come through, and adding additional information to the page’s links and forms, so that it can extract that information again when the next request comes through.

If the user follows the link, and we want to record it, we need to know all of the relevant information about the action, so that we can produce a line of code that will replay the action. This includes:

HTTP::Recorder overloads LWP::UserAgent’s send_request method, so that it can see requests and responses as they come through, and modify them as needed.

HTTP::Recorder rewrites the link so that it looks like this:

So, with the rewritten page, if the user follows this link, the request will contain all of the information needed to record the action.

Forms are handled likewise, with additional fields being added to the form so that the information can be extracted later. HTTP::Recorder then removes the added parameters from the resulting request, and forwards the request along in something close to its originally intended state.

HTTP::Recorder won’t record 100% of every script you need to write, and while future versions will undoubtedly have more features, they still won’t write your scripts for you. However, it will record the simple things, and it will give you example code that you can cut, paste, and modify to write the scripts that you need.

Some ideas for the future include:

The latest released version of HTTP::Recorder is available at CPAN.

Patches, feature requests, and problem reports are welcomed at http://rt.cpan.org.