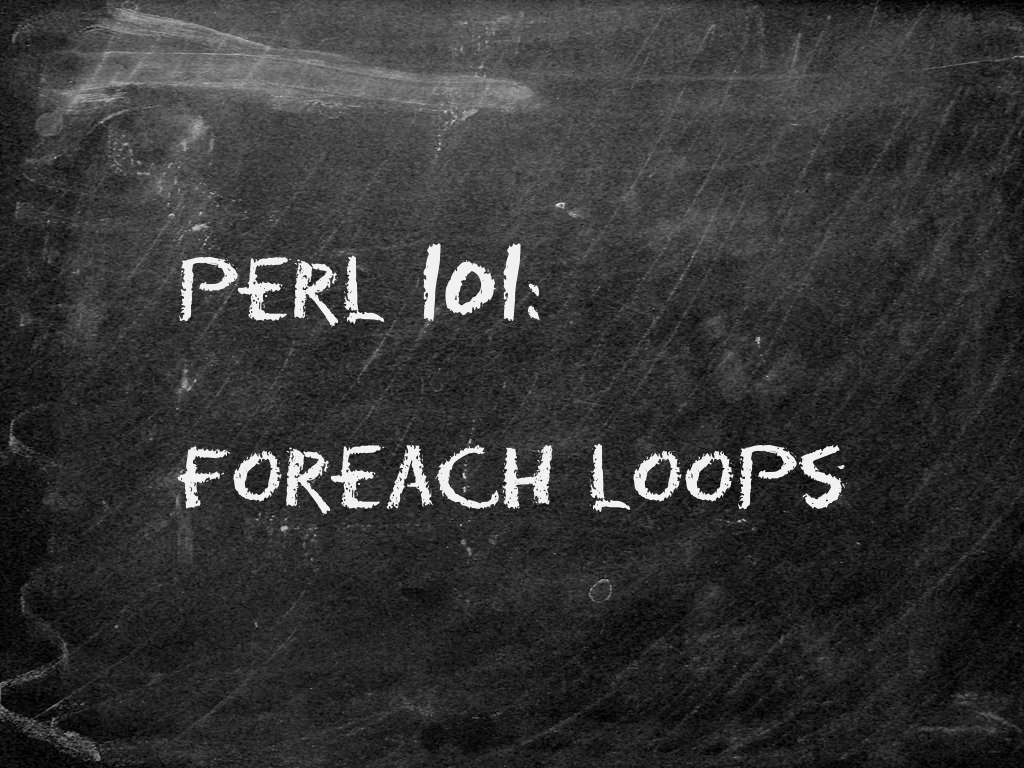 A foreach loop runs a block of code for each element of a list. No big whoop, “perl foreach” continues to be one of the most popular on Google searches for the language. So we thought we’d see what’s happened in 20 years. I expand on Tom Christiansen’s slide that’s part of his longer presentation then add a new but experimental feature at the end. If you want more, there’s plenty to read in perlsyn or my book Learning Perl.

Unless you say otherwise, foreach aliases the current element to the topic variable $_. You can specify that list directly in the parentheses after foreach, use an array variable, or use the result of a subroutine call (amongst other ways to get a list):

Some people like to use the synonym for. There’s a proper C-style for that has three semicolon-separated parts in the parentheses. If Perl doesn’t see the two semicolons it treats for just like a foreach:

The aliasing is only temporary. After the foreach the topic variable returns to its original value:

The output shows that $_ appears unaffected by the foreach:

This is an alias instead of a copy, which is a shortcut that allows your program to be a little faster by not moving data around. If you change the topic you change the original value if the list source is an array (the values are read-only otherwise and you’ll get an error):

Not only that, but if you change the source by adding or removing elements you can screw up the foreach. This loops infinitely processing the same element because each go through the block moves the array elements over one position; when the iterator moves onto the next position it finds the same one it just saw:

This output will go on forever:

Naming your own topic variable

The $_ is often handy because it’s the default variable for several Perl functions, such as chomp or split. You can use your own name by specifying a scalar variable between the foreach and the parentheses. Usually you don’t want to use that variable for something other than the loop so the usual style declares it inline with the foreach:

Since Perl flattens lists into one big list, you can use more than one list source in the parentheses:

Or a mix of source types:

Using your own named topic variable acts just like what you saw with $_:

The output shows the aliasing effect and that the original value is restored after the foreach:

There are three keywords that let you control the operation of the foreach (and other looping structures): last, next, and redo.

The last stops the current iteration. It’s as if you immediately go past the last statement in the block then breaks out of the loop. It does not look at the next item. You often use this with a postfix conditional:

You start the block for element 3 but end the loop there and continue the program after the loop:

The next stops the current iteration and moves on to the next one. This makes it easy to skip elements that you don’t want to process:

The output shows that you run the block with each element but only the even numbers make it past the next:

The redo restarts the current iteration of a block. You can use it with a foreach although it’s more commonly used with looping structures that aren’t meant to go through a list of items.

Here’s an example where you want to get three “good” lines of input. You iterate through the number of lines that you want and read standard input each time. If you get a blank line, you restart the same loop with

The output shows that the loop effectively ignore the blank lines and goes back to the top of the loop. It does not use the next item in the list though. After getting a blank line when it tries to read the second line, it tries the second line again:

That’s not very Perly though but this is an article about foreach. A better style might be to read lines with while to the point that @lines is large enough:

There’s more that you can do with these. The work with labels and nested loops. You can read more about them in perlsyn or Learning Perl.

Since foreach goes through each element of a list, some people reach for it when they want to go through each line in a file:

This is usually not a good idea. The foreach needs to have to entire list all at once. This isn’t a lazy construct like you’d see in some other languages. This means that the foreach reads in all of standard input before it does anything. And, if standard input doesn’t close, the program appears to hang. Or worse, it tries to completely read terabytes of data from that filehandle. Memory is cheap, but not that cheap.

A suitable replacement is the while idiom that reads and processes one line at a time:

This is really a shortcut for an assignment in scalar context. That reads only one line from the filehandle:

This is handy in a foreach where the elements of the list are hash references. First, here’s how you might do this without the feature. Inside the block you interact the $hash as a reference; you must dereference it to get to a value:

With v5.22’s refaliasing feature you can use a named hash variable as the topic. Inside the block you interact with the current element as a named hash. There’s no -> for a dereference:

The output is the same in both programs:

There’s a warning from this experimental feature (and, all such features). The feature might change or even disappear according to Perl’s feature policy. Disable the warning if you are comfortable with that:

The foreach is a handy way to go through a list an element at a time. Use it when you already have the list completely constructed (and not to process a filehandle). Define your own topic variable to choose a descriptive name.