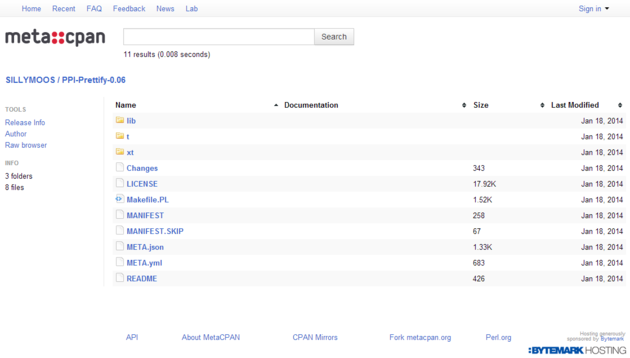 It can be confusing for new Perl programmers to understand the terminology used to describe Perl distributions and their accompanying files. This article explains the core concepts.

A Perl package is just a section of code defined in a .pm file, like this:

The start of the package begins with the “package” declaration. A package is a lot like a class, except that it can denote a collection of subroutines and variables, and not necessarily be instantiated as an object. Usually a .pm file will have one package declaration per file, but you can have multiple packages in a .pm file, similar to Java and C# where you can have multiple classes in a single file.

A module is a .pm file (“pm” means Perl Module). When you import a module with “require” or “use”, you are literally referencing the file name and not the package(s) contained in the file. For example to import the “Data::Connector” package defined above, we could save it in a file called “Whatever.pm” and later reference it in a script like this:

All .pm files must end with a “true” value per Perl’s requirements, so most authors either place “1;” or “__PACKAGE__;” as the last line of the .pm file. In Perl a true value is any value that is not: null, zero or a zero-length string.

These are the typical directories and files found in a Perl distribution but as there is no fixed standard, distribution authors are free to include and exclude the files they wish. For a good example, check out the files provided by David Golden in a distribution of the the popular HTTP::Tiny module.

Once you get to grips with Perl packages, modules and distributions it’s far easier to start hacking on Perl modules that don’t work the way you want them to. For example, in the case of a module that won’t install, you can download the distribution from CPAN (at the command line “cpan -g Module::Name”), untar it, and patch the failing tests, or examine the source code in the lib directory and resolve a bug or two. Before long you’ll be releasing your own distributions to CPAN!

Enjoyed this article? Help us out and tweet about it!